Is The US Suicide Rate Rising?

Home Is The US Suicide Rate Rising?

Is The US Suicide Rate Rising?

The prevalence of suicide has always been a large social issue that demands attention from everybody in the country. Mental health and suicide rates are watched closely and are especially concerning because they affect people of all ages, social classes and demographics for different reasons. Plus, signs of suicide aren’t always recognizable — unless you know what they are and actively look for them — until it’s too late. Many experts lately have been wondering: “are US suicide rates on the rise?” What does the data actually show us?

Short answer: sadly, yes, suicide is on the rise in the United States. It is currently the 10th leading cause of death in the country and one of just three leading causes of death that have been escalating. Statistically, nearly every state in the country has experienced an increase in suicides, with rural areas being affected the most. In fact, the rise in suicide rates has significantly contributed to a decline in the overall US life expectancy according to  CDC data. This unfortunate truth is one of the reasons why our CSCU technicians are so experienced in dealing with suicides in a variety of settings and situations including suicide cleanup and homicide cleanup.

Many factors contribute to risks of suicide. It’s important to discuss and understand the main causes of suicide to try to prevent it from happening. Researchers with the CDC found that relationship problems or loss, substance abuse,  physical health problems and job, money, legal, or housing stress contributed to risk of suicide. There are also cases of accidental or unintentional suicides. Hundreds of people in the US die each year due to accidental shootings. Firearms were the most common method of suicide used by those with and without known diagnosed mental health condition.We all need to do our part in helping to prevent suicide. If you or someone you know might be at risk of suicide there are a number of resources that can provide assistance. Remember that you are not alone.

Learn the warning signs of suicide to identify and appropriately respond to people at risk. Find out how this can save a life by visiting BeThe1To.

Reduce access to lethal means – such as medications and firearms – among people at risk of suicide. 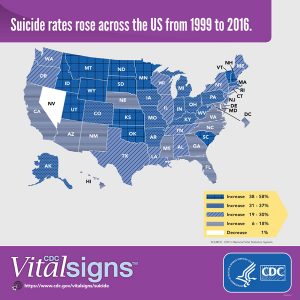